High up near the ceiling, in the dining room of his Seattle-area restaurant, Musa Firat recently installed a “killing zone” — a place where swaths of invisible electromagnetic energy penetrate the air, ready to disarm the..... 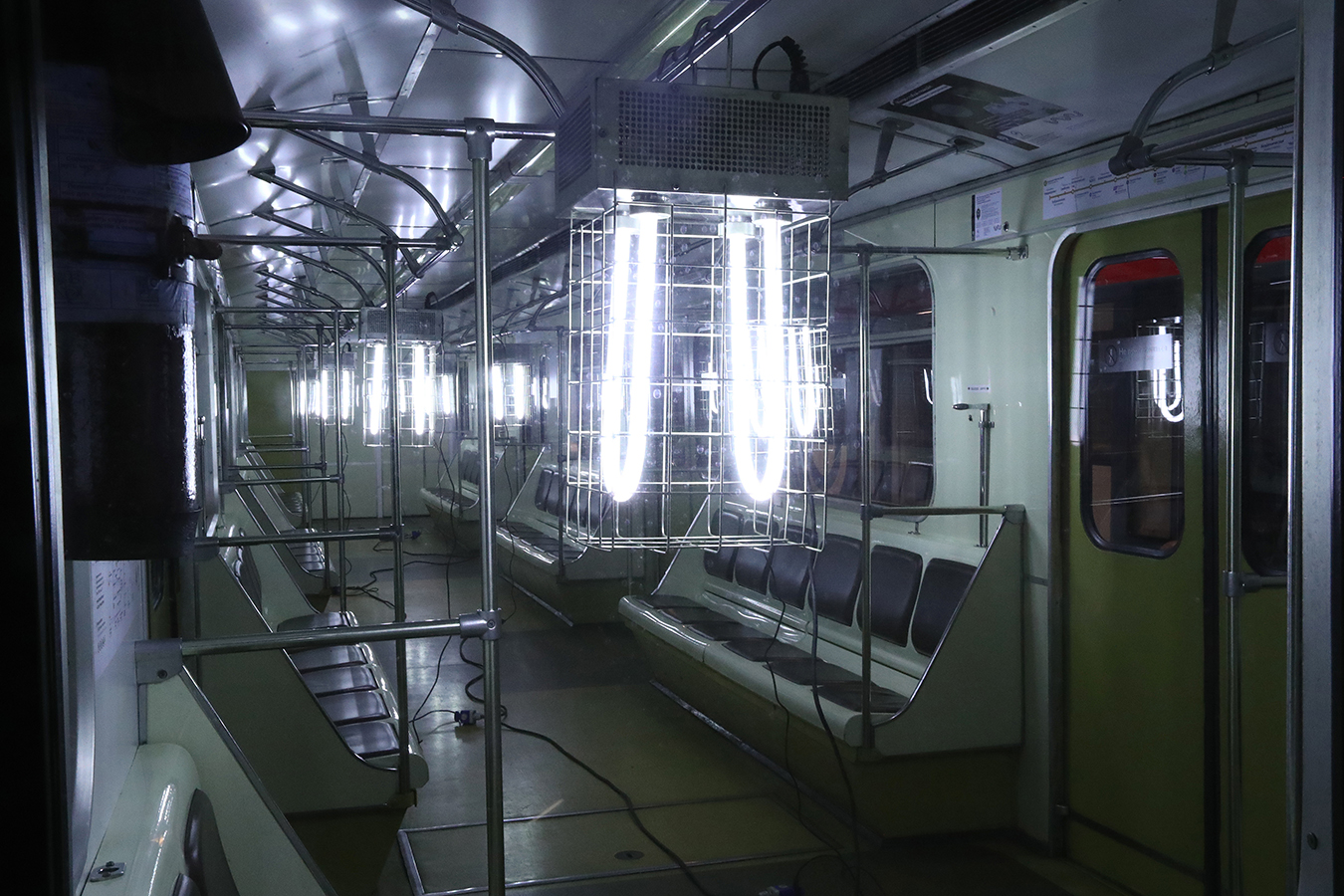 High up near the ceiling, in the dining room of his Seattle-area restaurant, Musa Firat recently installed a “killing zone” — a place where swaths of invisible electromagnetic energy penetrate the air, ready to disarm the coronavirus and other dangerous pathogens that drift upward in tiny, airborne particles.

Firat’s new system draws on a century-old technology for fending off infectious diseases: Energetic waves of ultraviolet light — known as germicidal UV, or GUV — are delivered in the right dose to wipe out viruses, bacteria and other microorganisms.

Research already shows that germicidal UV can effectively inactivate airborne microbes that transmit measles, tuberculosis and SARS-CoV-1, a close relative of the novel coronavirus. Now, with concern mounting that the coronavirus that causes COVID-19 may be easily transmitted through microscopic floating particles known as aerosols, some researchers and physicians hope the technology can be recruited yet again to help disinfect high-risk indoor settings.

“I thought it was a great idea, and I want my customers to be safe,” said Firat whose casual eatery, Marlaina’s Mediterranean Kitchen, is 20 minutes south of downtown Seattle.

As the U.S. grapples with how to interrupt the spread of the highly infectious virus, UV is being used to decontaminate surfaces on public transit and in hospitals where infectious droplets may have landed, as well as to disinfect N95 masks for reuse. But so far using this technology to provide continuous air disinfection has remained outside of most mainstream, policy-setting conversations about the coronavirus.

Experts attribute this to a combination of factors: misconceptions about UV’s safety, a lack of public awareness and technical know-how, concerns about the costs of installing the technology, and a general reluctance to consider the role of aerosols in the spread of the coronavirus.

Aerosols are microdroplets expelled when someone exhales, speaks or coughs. Unlike the larger and heavier respiratory droplets that fall quickly to the ground, aerosols can linger in the air a long time and travel through indoor spaces. When someone catches a virus this way, the process is called “airborne transmission.”

It’s already recognized that the coronavirus can spread by means of aerosols during medical procedures, which is why health care workers are advised to wear respirators, such as N95 masks, that filter out these tiny particles. Yet there is still considerable debate over how likely the virus is to spread in other settings via aerosols.

Recently, the question of airborne transmission gained new urgency when a group of 239 scientists called on the World Health Organization to take the threat of infectious aerosols more seriously, arguing that the “lack of clear recommendations on the control measures against the airborne virus will have significant consequences.”

WHO officials conceded that more research is needed but maintained that most infections do not happen this way.

As the science continues to evolve, UV could emerge as an attractive safeguard against airborne transmission — one with a track record against pathogens — that can be deployed to reduce the risk of infectious aerosols accumulating in indoor settings such as schools and businesses. 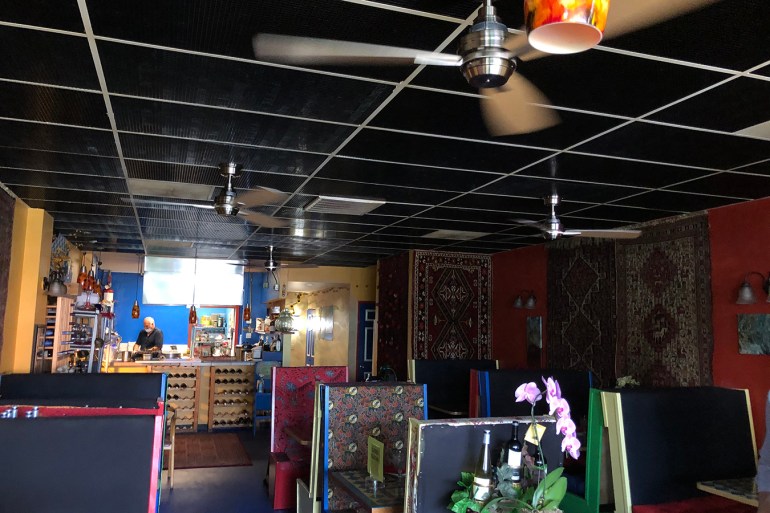 Inside Marlaina’s Mediterranean Kitchen, a Seattle-area eatery, which is battling the coronavirus using UV light. (WILL STONE FOR KHN) 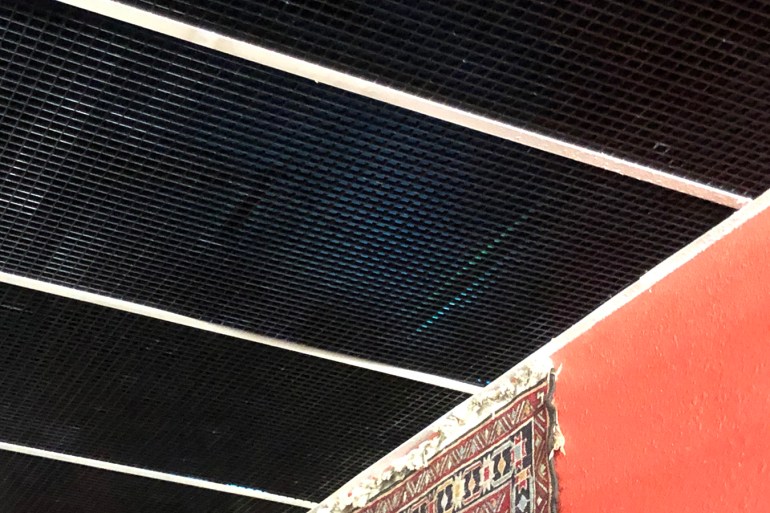 Ultraviolet fixtures mounted above the restaurant’s ceiling panels glow faint blue and create a “killing zone” that can wipe out viral aerosols building up in the air. Some experts are calling for wider adoption of UV light to help disinfect the air in indoor settings.(WILL STONE FOR KHN)

Welcome to the ‘Killing Zone’

At Marlaina’s restaurant, there are just two visible clues of the new UV disinfection system — a subtle glow of blue light above the black grates of the drop ceiling, and a hand-chalked sign at the door, proudly announcing to diners: “Coronavirus Disinfected Here!”

The system was installed while the restaurant was closed during Washington state’s lockdown. The setup is known as “upper-room germicidal UV” because the UV fixtures are mounted high and angled away from humans below.

Ceiling fans circulate the air, eventually pushing any suspended viral particles that have accumulated in the dining space through the grated drop ceiling, to the area where UV lights, positioned horizontally, blast them with radiant energy.

The inspiration and technical assistance for Marlaina’s owner came from customer Bruce Davidson, a pulmonary physician who was Philadelphia’s “tuberculosis czar” in the mid-’90s. Back then, the U.S. was grappling with a new outbreak of TB that included strains resistant to existing drugs.

“Preventing transmission was the most important part, because we had no drugs, no vaccine,” recalled Davidson, who now lives outside Seattle. UV light proved to be a key strategy back then, and Davidson thinks it can help again: “It really ought to be in most indoor public spaces now.”

To demonstrate the concept, Davidson lit a cigar inside Marlaina’s and showed how the smoke danced upward, collecting in the ceiling space with the UV fixtures.

“If somebody has undetected coronavirus and doesn’t eat with a mask and is talking and so on, the vast majority of their particles are going to get pulled up there into the killing zone and circulate and bounce around,” Davidson said. “Statistically, the risk to other people is going to be very low.”

Research shows close to 90% of airborne particles from a previous coronavirus (SARS-CoV-1) can be inactivated in about 16 seconds when exposed to the same strength of UV as in the restaurant’s ceiling. Other viruses, such as the adenovirus, are more resistant and require a higher dose of UV.

“Although it’s not perfect, it probably offers the best solution for direct air disinfection” in the current pandemic, said David Sliney, a faculty member at Johns Hopkins University and longtime researcher on germicidal UV.

When used with proper ventilation, upper-room GUV is about 80% effective against the spread of airborne tuberculosis, according to several studies. This is equivalent to replacing the air in a room up to 24 times an hour.

But widespread adoption of UV systems could be an uphill battle, Sliney said, because in the U.S., interest in using UV for air disinfection has waned in recent decades as scientists focused their attention on powerful vaccines and drugs to deal with infectious diseases.

UV can be a powerful weapon against an airborne virus, but it can go only so far toward preventing infection. People can still get sick from the larger, heavier droplets ejected via coughs and sneezes. They can directly inhale those droplets or touch a surface contaminated with them, and then touch their eyes, nose or mouth.

UV also does not prevent someone from being exposed to infectious aerosols that have just emerged from an infected person — and are lingering quite near his or her body — what researcher Richard Corsi called the “near field.”

“In that scenario, you’re inhaling a very concentrated cloud of these tiny particles that you can’t see,” said Corsi, dean of the Maseeh College of Engineering & Computer Science at Portland State University. “You’re getting a pretty significant dose in your respiratory system.”

So, even if there is upper-room UV in a building, Corsi said, face masks and social distancing are still necessary to block larger respiratory droplets and remove some of the aerosols in the near field. But Corsi said there’s now enough evidence to show that coronavirus aerosols can hang in the air and spread throughout a room (“the far field”), and it’s time to take that airborne spread seriously.

One example of far-field transmission is documented in a study of a restaurant in China at which some diners seated at neighboring tables contracted the COVID-19 virus despite never coming into close contact with the “index case-patient.” Another piece of evidence came from a March 10 choir practice in Mount Vernon, Washington, after which the majority of singers contracted the coronavirus, even though members of the group took precautions to use hand sanitizer and avoid hugs and handshakes.

In their letter to WHO, scientists note that the coronavirus that causes MERS can spread through aerosols, and “there is every reason to expect that [the COVID virus] behaves similarly.”

Understanding the Technology and Safety

Germicidal UV harnesses a portion of the electromagnetic spectrum that contains short waves of radiant energy, called UV-C. This wavelength is further away from the visible spectrum than other forms of UV light.

Think of it as giving the virus a lethal sunburn.

“We have very little practical experience to show how effective it can be [in a pandemic] since it’s been out of use in this country and in Western Europe,” said Sliney of Johns Hopkins, who chairs a committee with the Illuminating Engineering Society, which recently released new guidance on GUV.

Sliney recommends installing UV in big-box stores, restaurants and grocery stores, which typically have high ceilings. “There needs to be vertical air exchange,” he said, as with ceiling fans, so “it’s not just sterilizing the air in the upper space of the room.”

“No one doubts the efficacy of germicidal UV in killing small microorganisms and pathogens. I think the bigger controversy, if there is any, is misperceptions around safety,” said Dr. Edward Nardell, a professor at Harvard Medical School who researches GUV.

Low-dose germicidal UV can damage the eyes and skin, but Nardell said those risks can be avoided by following the appropriate guidelines. While international guidelines warn against directly exposing humans to UV-C, the risks of skin cancer are considered negligible, especially compared with longer wavelengths of UV that can penetrate more deeply.

Could UV Make a Comeback?

With interest in UV climbing, there is concern about shoddy products on the market and exaggerated claims about their effectiveness against the virus, said Jim Malley, a professor at the University of New Hampshire who studies public health and disinfection.

Consumers should be wary of marketing claims about “UV wands” that can be waved quickly over surfaces or special “portals” that people walk through, he said, because those are probably not correctly calibrated to inactivate the virus and could be dangerous.

Malley said he does not think there’s much of a viable market for upper-room GUV outside health care settings, but he supports installing the technology in the most high-risk settings, such as meatpacking plants and nursing facilities.

“My gut feeling is we should do anything we can in those places, because we have a horrendous fatality record” with the coronavirus, he said.

At Marlaina’s restaurant, the installation was relatively straightforward.

The owner, Firat, purchased four UV fixtures (at $165 each), hired an electrician to install the fans and bought black gridded plastic panels to enclose the ceiling space where the UV is mounted.

Firat still encourages his customers to wear masks and maintain social distance. But he said the UV has become part of the ambiance.

“It’s more modern and clean, and the response is great, absolutely great,” he said.

This story is part of a partnership that includes NPR and Kaiser Health News. 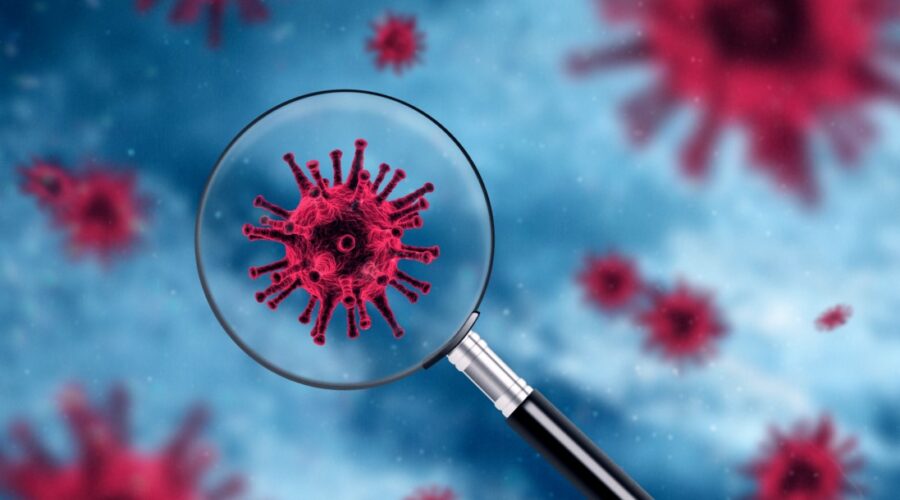 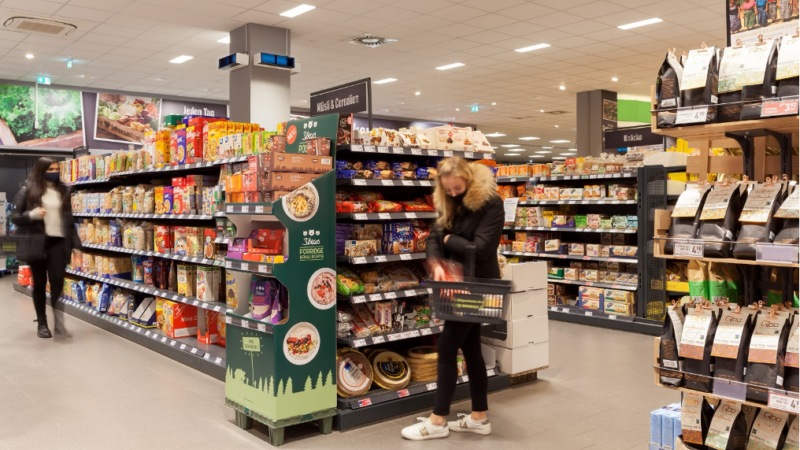 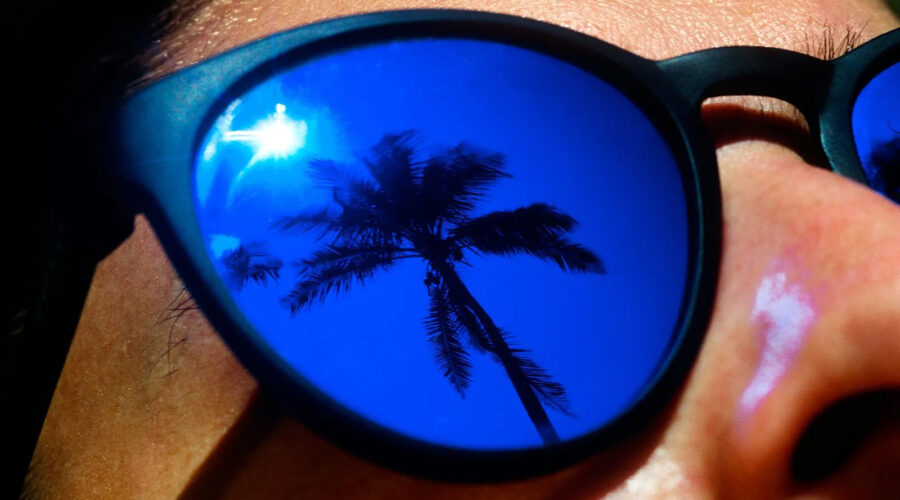